Who is the greatest surfer

The 4 Best Surfers in History

“Sliding on waves”, or He’e Nalu in Hawaiian, is a gift that has been passed on to us by our Polynesian ancestors, with a history of over 4,000 years. Over the last decade, surfing has gained more popularity than ever, and will make its debut at the 2020 Olympics.

But surfing is more than just a sport. It is a form of art, a means of self-expression, and a way of life. However, riding a wave before it breaks is not easy. Learning to surf waves takes a lot of time, patience, and commitment. It takes many failed attempts to gain the experienced required to read waves and ride them in style.

While most of us struggle to amp up our skills, it seems as though some people were born to surf. The latter began as humble beach boys, exploring the oceans and pushing their limits. Their fame, world records, and different surfing styles went down into history and continue to inspire both novice and advanced surfers all around the world.

Let’s take a peek into the lives of history’s most legendary surfers inside and outside the curl:

Dubbed ‘The Father of Modern Surfing,’ The Duke was a native Hawaiian swimmer. Growing up, the ocean became Duke’s playground, and here are some of his most notable achievements:

At 21 years old, he grabbed his first Olympic gold medal for the 100-meter freestyle; he remained the United States’ representative at the Olympics for the next 20 years.

In 1914, he introduced surfing to Australia and New Zealand. Duke was loved by many; not just as a superb surfer and swimmer but also for his sportsmanship and heart for his craft.

In 1918, he raised funds for the war efforts by swimming in exhibitions in 30 mainland cities.

In 1968, Duke passed away aged 77. In remembrance for his exemplary performance as a surfer, the United States Postal Service released a limited-edition commemorative stamp depicting a young Duke Kahanamoku in Waikiki.

Hailed as one of the world’s best big wave surfers, Laird Hamilton became particularly famous for his ride on the “Millennium Wave” at Teahupo’o in the year 2000, which was considered the biggest wave ever at the time. Aside from being a frontrunner in surfing and popularizing paddle boarding and SUP surfing, Hamilton is also famous for being a multi-disciplinary athlete.

Here are some interesting facts about this famous surfer:

He is a highly revered model, producer, TV host, fitness and nutrition expert, stuntman, and author.

Hamilton coined tow-in surfing, which entails the use of a personal watercraft (PWC) in towing a surfer into large waves. As a pioneer of this technique, Hamilton described it as “just going as fast as you’ve ever been. Really, it’s just the sensation of speed.” 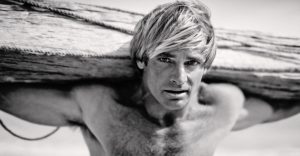 As a surfing aficionado, Hamilton believes that surfing is a creative process that is intrinsically motivated rather than a sport driven by external rewards.

Born Robert Kelly Slater in 1972 and acclaimed as ‘The Greatest Surfer of All Time,’ Kelly Slater’s career in surfing began at the tender age of six. His career skyrocketed when he began winning successive surfing championship titles at the young age of 11.

Here’s a snapshot of his awe-inspiring success in the world of surfing:

Slater became a television household name after landing a role in the famous series Baywatch as Jimmy Slade.

After a brief hiatus in the year 1998, Slater began whipping the waves again in 2002, where he broke every professional surfing record up until the year 2011. 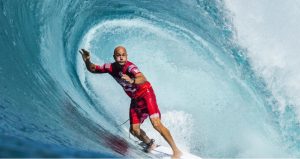 In 2015, he unveiled his greatest entrepreneurial achievement yet, the Slater Wave Pool, which creates the perfect canvas for surfers. Located in the middle of the California desert, the pool can create 50 different types of waves at the push of a button, and took a decade for Slater’s team to create. It is described as a combination of cutting-edge engineering and science designed to create the longest, rideable man-made wave in the world.

In September 2017, it was reported that the World Surf League will hold its first public event at Slater’s Surf Ranch in May 2018.

Labeled by the London Times as the ‘siren voice of a nonconformist surfing lifestyle,’ Miklos ‘Da Cat’ Dora was known as an unmatched rebellious surfer. Here’s a look into the unorthodox life of one of the world’s best and out-of-the-box surfers:

The Hungarian surfer is known for popularizing longboard surfing. His light stance on the board and ‘ultra-nimble’ footwork earned him the nickname of ‘Da Cat.’

After his parents divorced at the age of six, his drunkard stepfather, Gard Chapin, California’s best surfer in the late 1930s and early ‘40s, introduced him to the surfing realm. Influenced by his stepfather’s aggressive and ill-tempered personality, Miki demonstrated a somewhat lonely and aggressive surfer personality, even protesting against the commercialization of surfing. 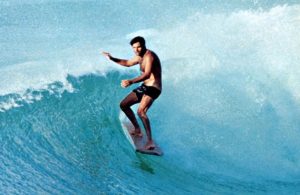 As a mysterious and gifted surfer, Miki was hailed as the first superstar of the surfing world.

Living a thug life, Miki spent time behind bars for fraud and grand robbery in 1973. He died in 2002 after succumbing to pancreatic cancer.

« best gifts for surfers
How To Choose The Right Riser Pads »

« best gifts for surfers
How To Choose The Right Riser Pads »